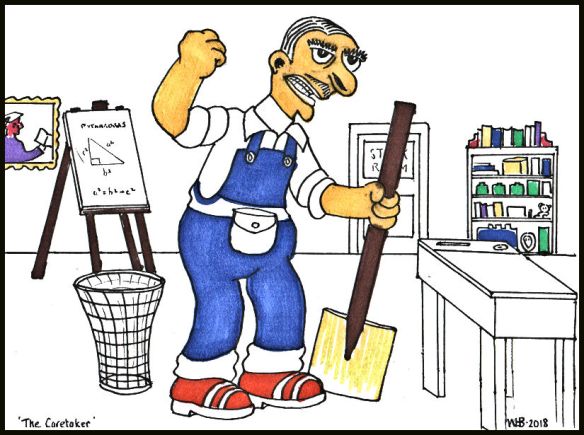 “Shall I collect the red chesters?”,
The caretaker said to me.
He’d said it so often I didn’t demur;
I grimaced and just let it be.

For him to take care of a school,
That was a daily trial.
He’d disappear for hours on end;
Complaints just met with denial.

‘Thruppence short of half a crown’,
Was how we described him then;
But that was being so unkind
To a minnow amongst men.

He shuffled around from place to place
Carrying brush and pan,
Picking up what others dropped,
Doing it because he can.

When needed to open a stockroom door
He went to find the key.
Two hours later he appeared
To set the prisoner free.

He stoked the boiler from time to time
To keep the heating on,
But never remembered to turn it off
When wintertime had gone.

He swept the playground with a broom
The way he’d always done.
You couldn’t see the difference
From when he had begun.

Cleaning out the long jump pit
Was just a task too far.
He couldn’t tell a pile of sand
From half a ton of tar.

And as for adding up I found,
He wasn’t the wisest of men.
When asked to count milk bottles up
He could never get past ten.

I asked him once how many chairs
He’d set out in the hall.
He told me, about ten rows, plus two,
He’d put against the wall.

And as for cleaning out latrines,
He didn’t find that easy.
He couldn’t wash a basin out
Without him feeling queasy.

So why, you ask, did I appoint him,
Choose him before another?
Sorry, but I do admit,
He was my dearest brother.

N.B.  ‘Red Chesters’ is the way some people mispronounce the word ‘Registers’, which are the daily attendance records maintained in each class of UK schools.

10 thoughts on “The Red Chesters”