I can find no trace of the poem / ditty printed below.   I am not the author, and I am unable to find out who is / was.   Many years ago, when I was probably around the age of 6 or 7  (i.e. in the 1940s – yes, that’s right, during WWII ),  I learnt this poem by heart and delivered it to an audience at a Yorkshire chapel concert – presumably to demonstrate  my skills in memorised recitation.  Well  …  it certainly wasn’t to showcase a budding poet!   Although I don’t recall being sensitive at the time about the cannibalistic sentiments expressed,  I do now see the poem as somewhat ‘non-PC’ and quite unsuitable for directing a child to commit such verses to heart and then expound them in public.

. . .   and Yes,  I have never forgotten these verses, the dramatic emphases within the poems structure, or the subtle cadence of its rhythms (!!!).   So . . .  make of it what you will, but  I would certainly be interested if anyone can throw light on its origins and/or its creator!  . . .

. . .  I remember being instructed to “pause before delivering the last line … and then say it quickly and loudly – with emphasis!”  . . .  What artistry !!!

If I had my wish
I would be a small fish
And swim where nobody could catch me.
I never would look
At a worm on a hook,
Or some naughty boy then might snatch me.

I’d frolic and play
With the fishes all day,
And not go to school at nine-thirty.
I’d not give a bean
If my neck wasn’t clean,
Or if BOTH my ears should get dirty.

And when I had died,
I should like to be fried,
With the bones taken out of my tummy,
And served, if you please,
With some lovely green peas,
… and then eaten up by my mummy!

A small collection of four cartoons on this subject which have amused me during my long-ago career as a teacher.

‘TELL-TALE-TIT’
… or The Trials & Tribulations If A Schoolteacher

They did it, sir, I saw them,
They pestered and annoyed her,
They spread your desk with powder,
They turned the sound up louder,
Oh, please sir, say you’ll whack ’em.

She did it, miss! I saw her!
She spread the floor with water.
She splashed the paint on Susan Porter;
She cut the model dog in quarter.
I’m awfully glad you’ve caught ‘er.

You did it, sir, you caught ‘em.
You found them where they hid it,
You even found them with it,
So you must believe they did it.
Red-handed!  Now you’ve taught ‘em!

He did it, sir! I saw him!
He fed the goldfish sawdust;
He made the hamster raucous.
Yes, he giggled when you caught US.
Believe me, sir, it WAS him.

Why don’t you, sir? Why don’t you?
Why not hit him with your ruler?
Why can’t you be a little cruel-er?
Why are you acting cooler?
You frightened that he’ll sue you?

A Spaniard called Senor Bitzwobble
Met the Pobble without any toes,
Who got him to keep very still
While he swatted a fly on his nose.

‘I’ve seen your bits wobble’, said Pobble,
‘I suggest what you need is a mate;
Someone steady and willing
Life would soon become thrilling –
How about me being your date?’

Well, they soon hit it off and got married,
Well, that’s how this story then goes,
They had many children together –
Married life had its highs and its lows.

Till, one day while they sunbathed together,
As in the bright sun they both dozed,
They both started to cough,
All heir bits then fell off,
And so their sad story then closed.

There’s a joy in scratching an itch
Which increases the more that I do it
The more that I try
I ask myself why
Can’t I give my whole future to it.

And when I eventually try
To give up the scratching, then why
Does this damned itch’s curse
Get so Intensely worse
That I must scratch it again or I’ll die?

There once was a poet from Ross
Who said “Do not mess with me, cos,
I will write you a verse
Which will contain a curse,
And you’ll never get over the loss.”

An Indian poet from Mysore
Said, “Do not mess with me, or,
I will write you a verse,
And you’ll soon need a hearse,
To take you to knock on Hell’s door.”

A poet from Irish Killarney
Had kissed that famed stone at Blarney.
He wrote endless verses
All riddled with curses,
Enough to frighten an army.

Icons of my Past

My era has passed and gone,
And with it all my heroes,
But memory lingers long,
Of giants, saints and weirdos.

These I have loved and known,
They made me who I am,
Imbibed while I have grown,
Since I lived in a pram.

How they have coloured my life,
These heroes, these comic bygones,
But through victory and strife,
They’ve ever been my icons.

How many do you remember,
Who live and colour your dreams?
Valiant or tender,
Feeding both laughter and screams.

Just William:  ‘Just William’ is the first book of children’s short stories about the young school boy, William Brown, written by Richmal Crompton, and published in 1922. William Brown is an eleven-year-old boy, eternally scruffy and frowning. He and his friends, Ginger, Henry, and Douglas, call themselves the Outlaws.  Also appearing in the books is Violet Elizabeth Bott, who is renowned for crying out “I’ll thcream and thcream ’till I’m thick”.  The stories were also used in numerous television, film and radio adaptations of the books.

Roy of the Rovers: A British comic strip about the life and times of a fictional footballer and later manager named Roy Race, who played for Melchester Rovers.

Biggles & his sidekick, Algernon (‘Algy’) Lacey:  James Bigglesworth, nicknamed “Biggles”, is a fictional pilot and adventurer, the title character and hero of the Biggles series of adventure books, written for young readers by W. E. Johns. There are  almost 100 Biggles books published between 1932 and 1968.

Wilson of the Wizard – The Wonder Athlete – illustrated stories first published in 1943 as a comic strip, in the British illustrated story paper ’The Wizard’, written by Gilbert Lawford Dalton and drawn by Jack Glass.

Garth – action-adventure hero, created by Steve Dowling, in a comic strip published in the British newspaper ‘Daily Mirror’ from 1943 to 1997.

Desperate Dan was a wild west character in the now-defunct British comic magazine The Dandy.

Dennis the Menace:  a long-running comic strip in the British children’s comic The Beano.

Billy Bunter is a fictional schoolboy created by Charles Hamilton using the pen name Frank Richards. He features in stories set at Greyfriars School, originally published in the boys’ weekly story paper ’The Magnet’ from 1908 to 1940.

P. C.49 was created for radio by Alan Stranks. PC 49 (Police Constable Archibald Berkeley-Willoughby) was an ordinary bobby on the beat, solving crime in the late 40s and early 50s.

Flash Gordon is the hero of a space opera adventure comic strip created by and originally drawn by Alex Raymond. It was first published in 1934.

Superman is a fictional superhero, created by writer Jerry Siegel and artist Joe Shuster. He first appeared in the comic book Action Comics #1 in 1938.

Dan Dare is a British science fiction comic hero, created by illustrator Frank Hampson who also wrote the first stories.  Dare appeared in the Eaglecomic stories from 1950 to 1967. It was also dramatised seven times a week on Radio Luxembourg from 1951to 1956.

Captain Marvel, also known as Shazam, is a fictional American comic superhero, created by artist C. C. Beck and writer Bill Parker 1939 appearing in American comics originally published by Fawcett Comics. He is the alter ego of Billy Batson, a boy who, by speaking the magic word “SHAZAM!” (acronym of six “immortal elders”: Solomon, Hercules, Atlas, Zeus, Achilles, and Mercury), can transform himself into a costumed adult with the powers of superhuman strength, speed, flight and other abilities. Based on comic book sales, the character was the most popular superhero of the 1940s, outselling even Superman.

Declaration of a  Poet Manqué

Aka Roland of the White Rose –

And living a blissful prelapsarian life of the Imagination,

Being of covinous and unsound mind,

And possessing unlimited gall and braggadocio,

Do solemnly declare that, hereafter.

To remain in perpetuity,

And in ignorance of the consequences,

A resolute seeker after fake knowledge and untruth,

A dedicated harbinger of future inanity,

And forever an arbiter of other people’s predilections.

Signed and witnessed this 17th day of June,
Twenty twenty.

{ Citizen of this Parish and of Planet Earth } 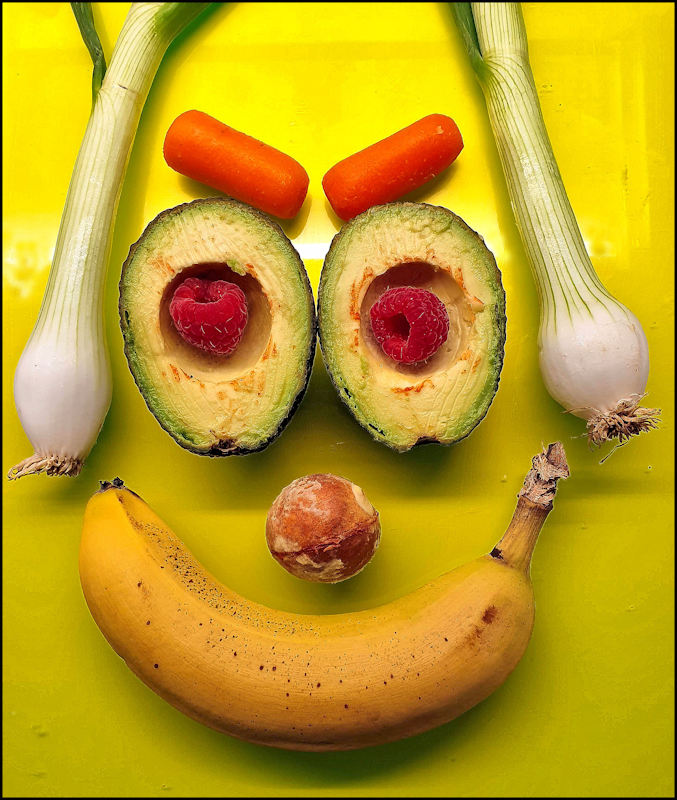 At my kitchen chopping board,
While I’m getting dinner ready,
I’m engulfed by cabin fever
As my feelings swirl and eddy.

I set out to cook a meal,
But I’m overcome by whimsy.
I lose all sense of time,
Must have been that double whisky.

I take the smile from a banana,
Avocadian eyes and nose;
The eyeballs are two berries,
Bet you’d never think of those.

Baby carrots for the eyebrows,
Fat spring onions for the locks:
Now I’ve made a veggie’s portrait,
Opportunity, it knocks.

As boredom in my kitchen
Strikes a pensive lock-down note,
So I struggle to amuse,
Try to keep my mind afloat.

A childish occupation?
Well, it helps to pass the time.
As I struggle to stay sane,
I can always find a rhyme. 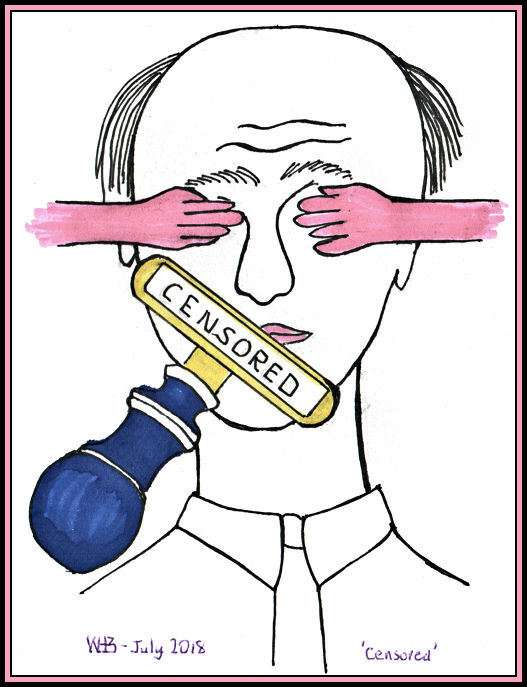 “To be, or not to be: that is the question: Whether ’tis nobler in the mind to suffer The slings and arrows of outrageous fortune, Or to take arms against a sea of troubles, And by opposing end them.”

Thoughts on Seeing, Fleeing and Being Politically Correct

To see, or not to see: that is the question : Whether’ tis wiser to look it full in the face, or, to turn that blind eye, which is the kiss of ineptitude, and by ignoring, forget them.

To flee, or not to flee: that is the question : Whether’ tis safer to meet with danger face to face, or, to turn and run, and by escaping, live to flee another day.

PC or non-Pc: that is the question: Whether ’tis better in the end to put up with the hawks and sparrows of mind distortion, or to take umbrage against such hubble-bubble, and by exposing suspend them.