The Applegarth
my own memory
of this sanctified place
sings of golden corn
bordering that arrowed path
where also was
the winning post
the last gasp
of those long-past
teenage
distance running races
marking my triumphs
measuring my success
against the countless strides
I had wrenched
from my straining body
to accomplish
to lead the race
the end of endeavours
signifying my own
my personal
accomplishment.

The Applegarth,
a trope
my metaphor
for my life.

Shaftesbury (in Dorset) and Sherborne (in Wiltshire) are towns only about 12 miles apart in South West England – in the area formerly part of Wessex. Both are charming historic towns with much to offer the visitor. Perhaps the best known features of these two market towns are the picturesque Gold Hill in Shaftesbury and the magnificent Abbey in Sherborne. I include just a few photographs of these two features in my Gallery below.

Gold Hill is a steep cobbled street in the town of Shaftesbury. It is famous for its picturesque appearance; the view looking down from the top of the street has been described as “one of the most romantic sights in England.” The image of this view appears on the covers of many books about Dorset and rural England, as well as on chocolate boxes and calendars and Television advertisements. 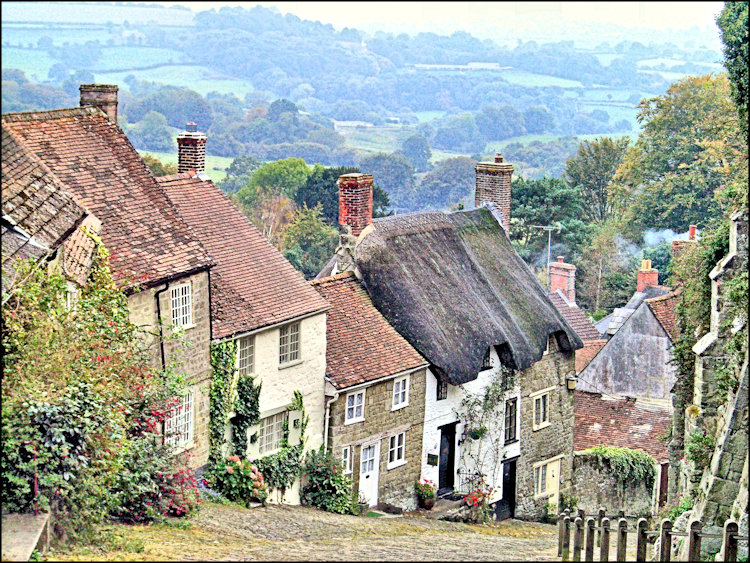 The Abbey Church of St Mary the Virgin at Sherborne is usually called Sherborne Abbey. It has been a Saxon Cathedral (705–1075), a Benedictine abbey (998–1539), and now, a parish church. 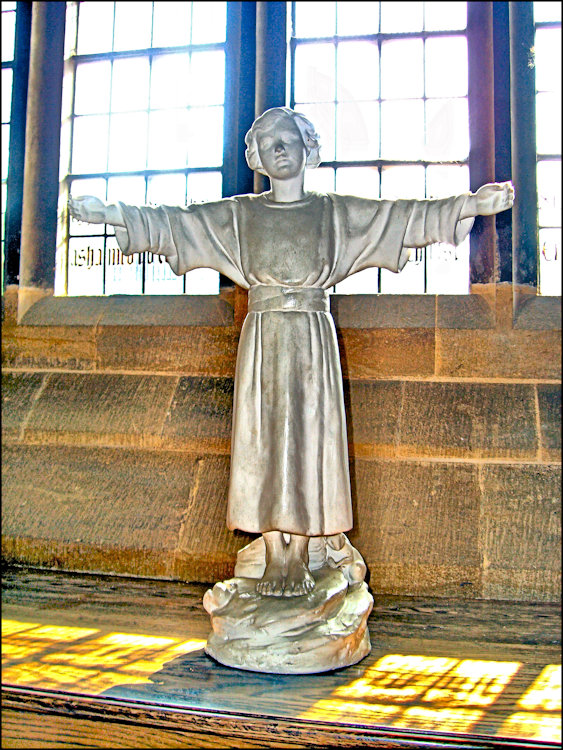 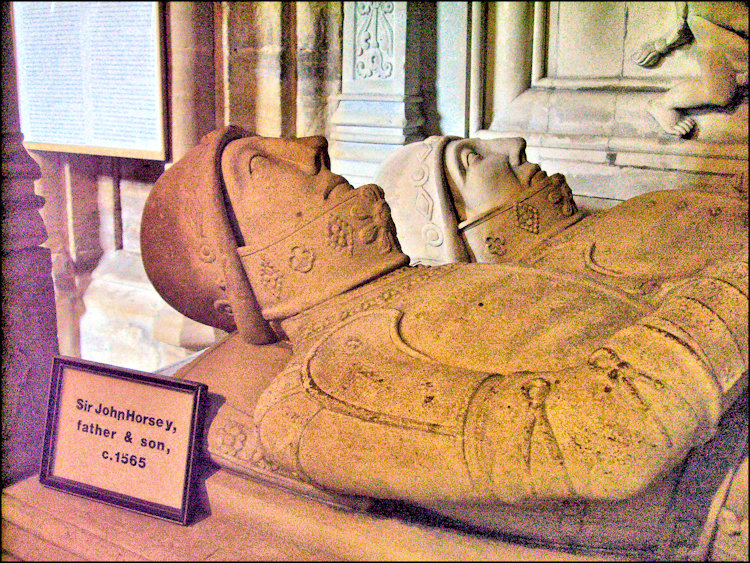 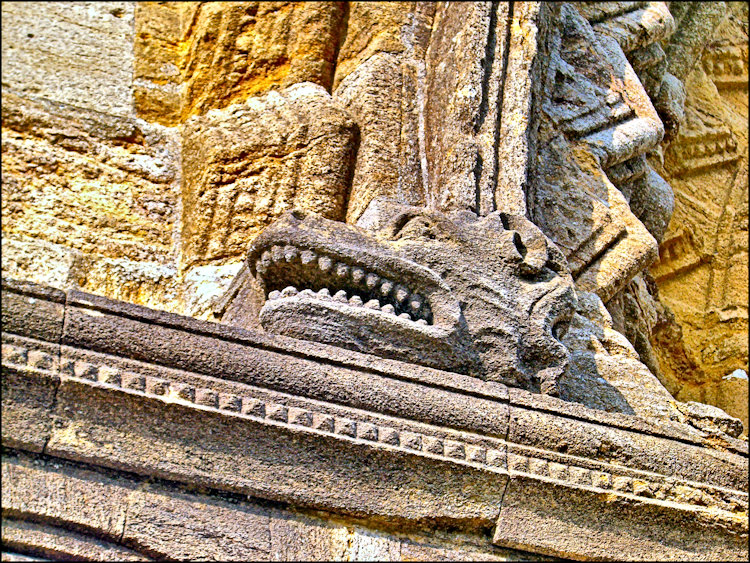 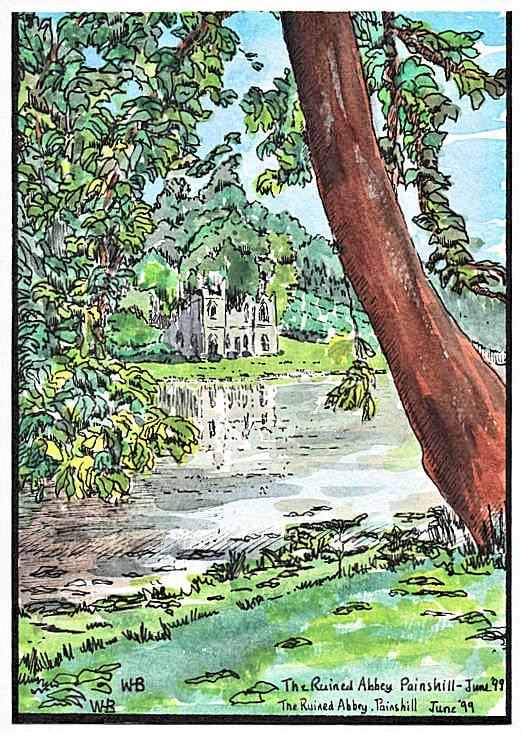 Fanciful, a fantasy,
undoubtedly a fallacy
yet
reflection of a legacy
portrayal of a history

A further (last – for the time being anyway) selection of my photographs of Whitby taken on my frequent visits there  in the past . . . 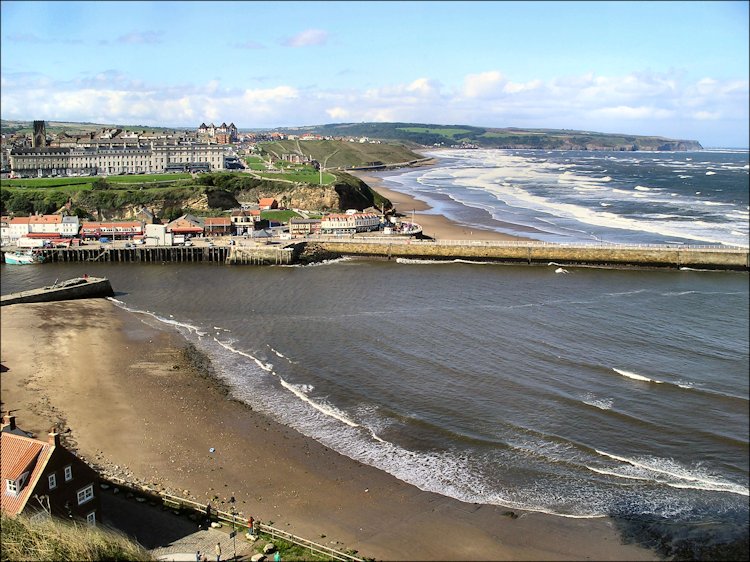 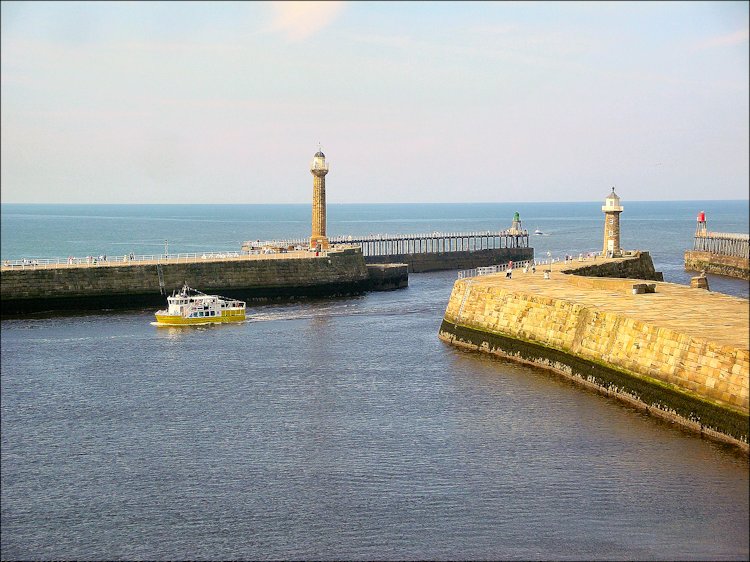 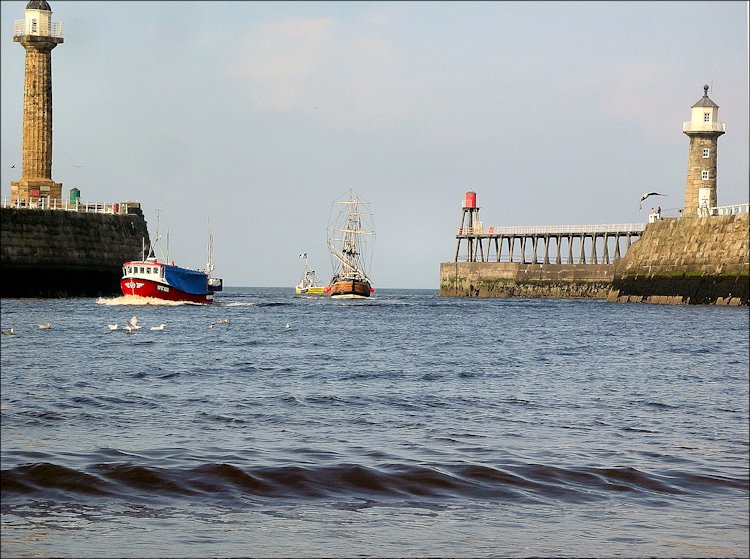 The ruins of Whitby Abbey atop East Cliff 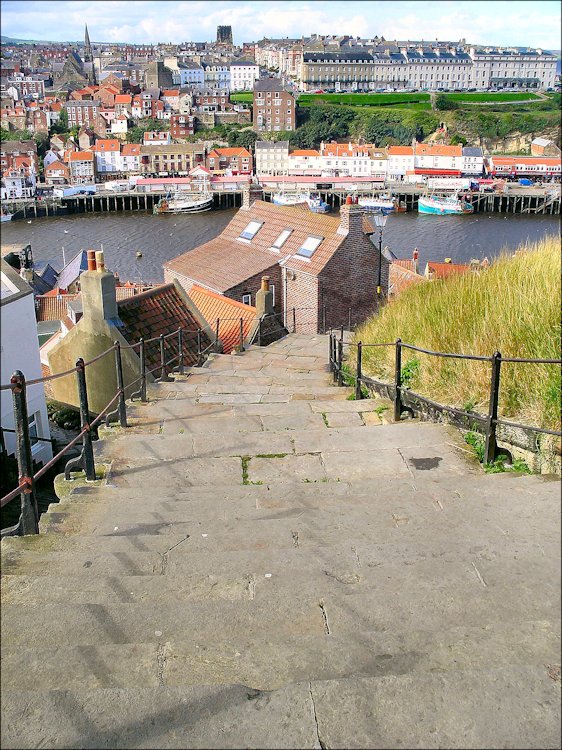 Whitby Town – view from the top of the 199 Steps

Caedmon’s Cross and Whitby Town – View from the Churchyard of St.Mary’s

Old gravestones in the churchyard – a prominent setting for Bram Stoker’s ‘Dracula’ story.

By the entrance to the church – Memorial to John Storr, the Coxwain of the Whitby lifeboat, and eleven others who lost their lives on the lifeboat in 1861. 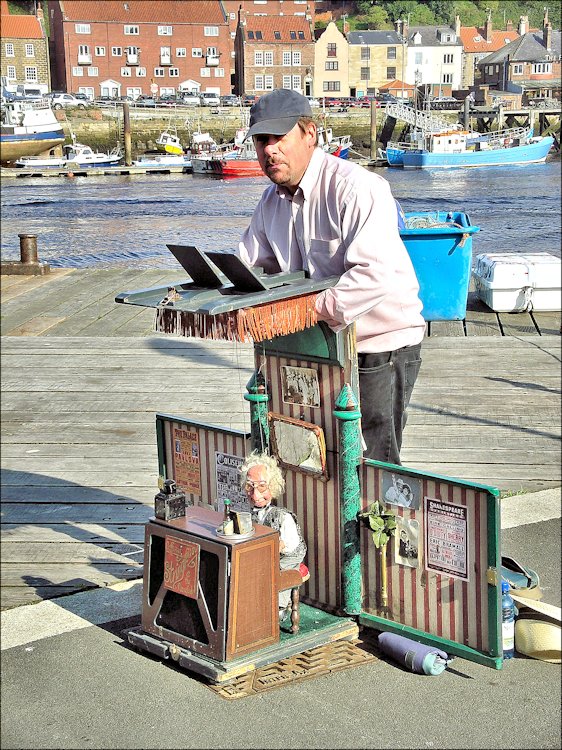 A further selection of my photographs of Whitby taken on my frequent visits there  in the past . . . 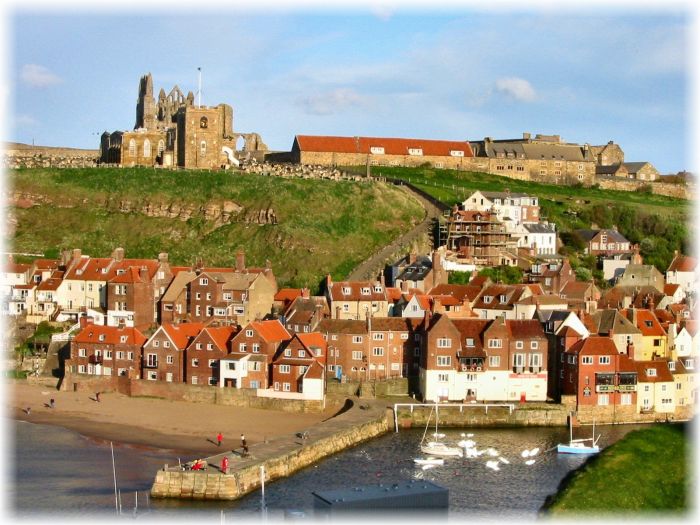 The Church of St. Mary on the headland on the south bank of the River Esk.   Ruins of the ancient Abbey can be seen behind the church

View of the inner harbour and the swing bridge crossing the River Esk and connecting the north and south areas of the town.

View to the east across the inner harbour 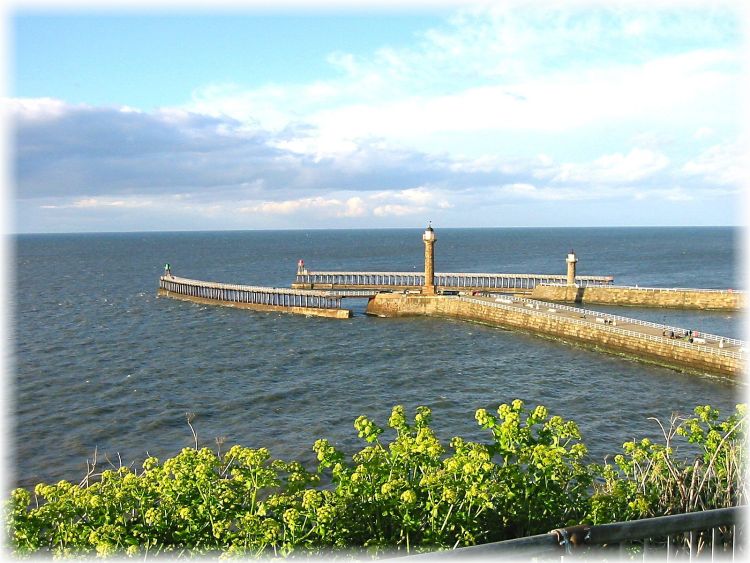 The breakwaters at the Whitby harbour entrance

Another view of the Whitby Whale Bone Arch

Bronze statue of Captain James Cook
The inscription reads:
Front: To Strive, to seek to find and not to yield. To commemorate the men who built, the Whitby Ships and the men who sailed with him.
North Side: In every situation he stood unrivalled and alone on him all eyes were turned.

. . .  very popular with the local gulls 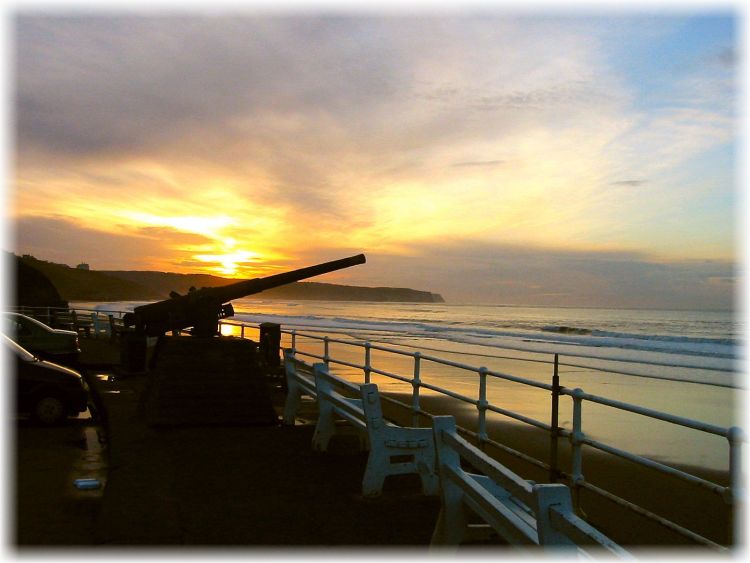 A WW2 anti-aircraft gun on the Whitby seafront 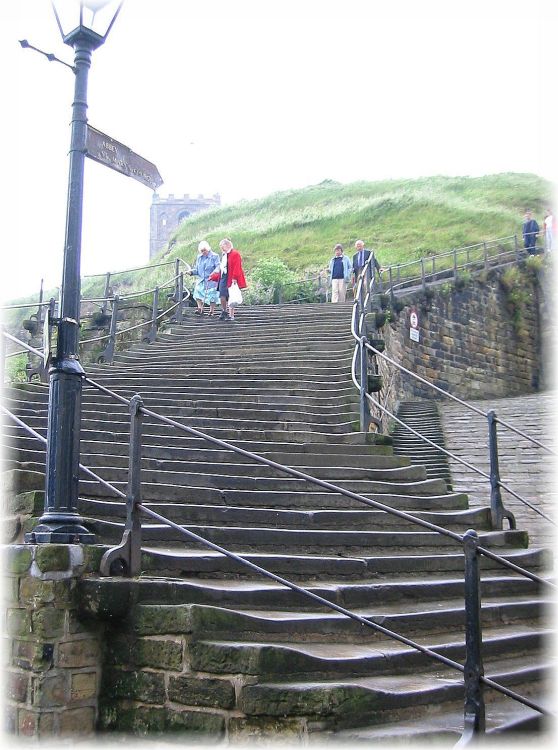 The bottom of the 199 steps in Whitby, leading up to Whitby Abbey and the top of the East Cliff.  These steps are an extraordinary attraction in Whitby, y attracting visitors from all over the world. 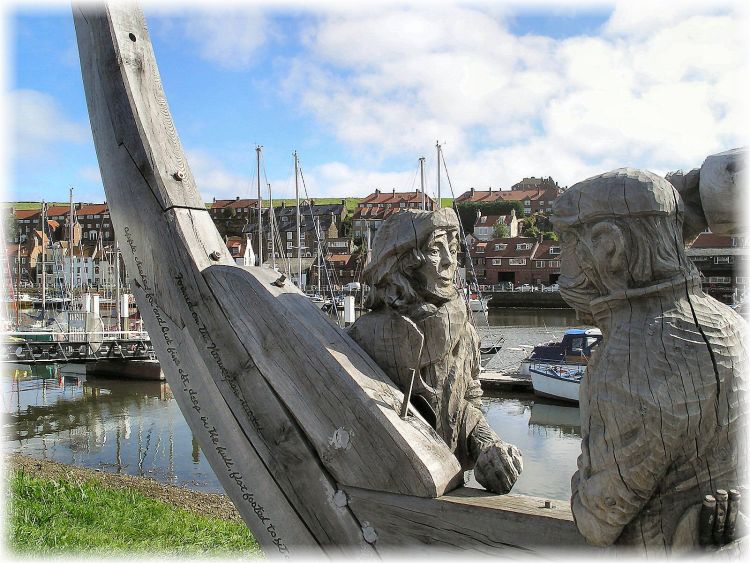 Wood-carved monument to Whitby seamen in the inner harbour

Inscription … “To the glory of God and in memory of Cædmon the father of English Sacred Song. Fell asleep hard by, 680.

Caedmon is credited with being the first English poet.

He lived in the 7th Century A.D.  His actual date of birth is unknown. What we do  know of him is chiefly found in The Venerable Bede’s, ‘The Ecclesiastical History of the English People’ written in 731 A.D.,  50 years after Caedmon’s death. In fact the language Caedmon recited and sang in was Old English.  His works were recorded by others and passed on to subsequent generations.  As Bede reports, Caedmon began as a lowly herdsman working mainly in the fields and grounds of the Northumbrian Benedictine monastery of Streonæshalch (later to become Whitby Abbey) on the coast of North Yorkshire during the time when the renowned St Hilda, or Hild, was Abbess between 657 and 680 AD.

The Abbey occupies a dramatic position, exposed as it is at the edge of the cliffs above the town of Whitby, and facing directly out to the North Sea.  It was disestablished and fell into ruin after the Dissolution of the Monasteries in the early 16th Century.

Caedmon’s story is a fascinating one, with few sources for verification of its authenticity.

Over the 3 days, starting tomorrow, I hope to present, translated by me from the original Old English, Caedmon’s own version of his life story.

Following my ‘Delightful Destinations’ blogs on Whitby and on Bosham, I would now like to make a brief visit to Malmesbury, an ancient hilltop town in England’s southern Cotswolds.  The town is almost completely encircled by the river Avon, and it claims to be the oldest Borough in England.  On the flat top of its hill stands the town’s ancient abbey, which was founded in the 7th century as a Benedictine monastery by Adhelm, the nephew of the then King of Wessex.  From then on the site became a renowned place of pilgrimage. Later, in the 10th century, Athelstan, grandson of Alfred the Great, and the first King of all England, chose Malmesbury as his capital.  Although he died in Gloucester, Athelstan is buried in the Abbey at Malmesbury.

The town, with its ancient abbey, its grounds and gardens, is a delight. One of its most stunning sights is the abbey church’s imposing south porch, dating from the late 12th Century, which has eight rows of carvings of biblical scenes. 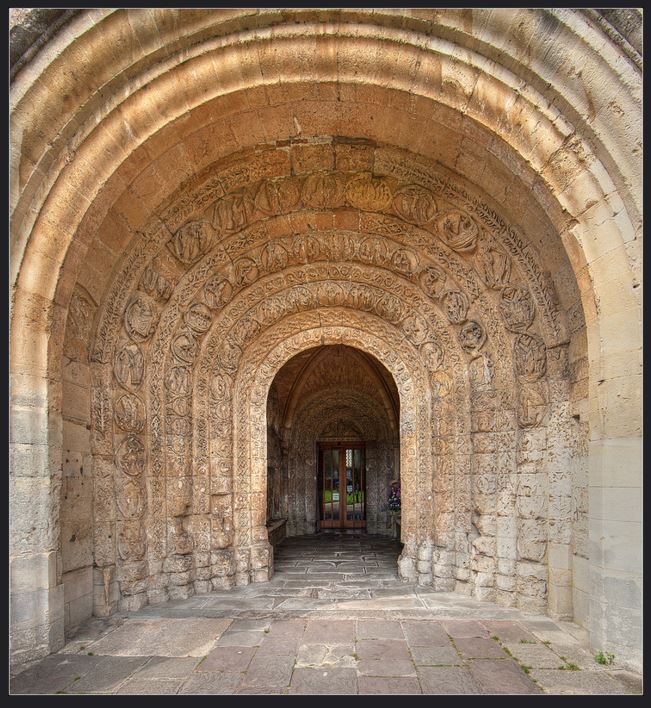 There are many fascinating stories associated with the town and its abbey, including that of the 11th century monk, Eilmer, who attempted one of the earliest human flights.  Details of Eilmer’s story can be found on Wikipediea at:      ST.EILMER’S STORY   . . .

Another story concerns the death of a Hannah Twiddow. who, in 1703, became, or so it is recorded, the first woman to have been killed in the UK by a tiger.  More of this and other local stories can be discovered at the museum in the old Town Hall.

Several paintings of the abbey at Malmesbury were made by J.M.W. Turner in the late 18th and early 19th centuries.  I reproduce two of them below … 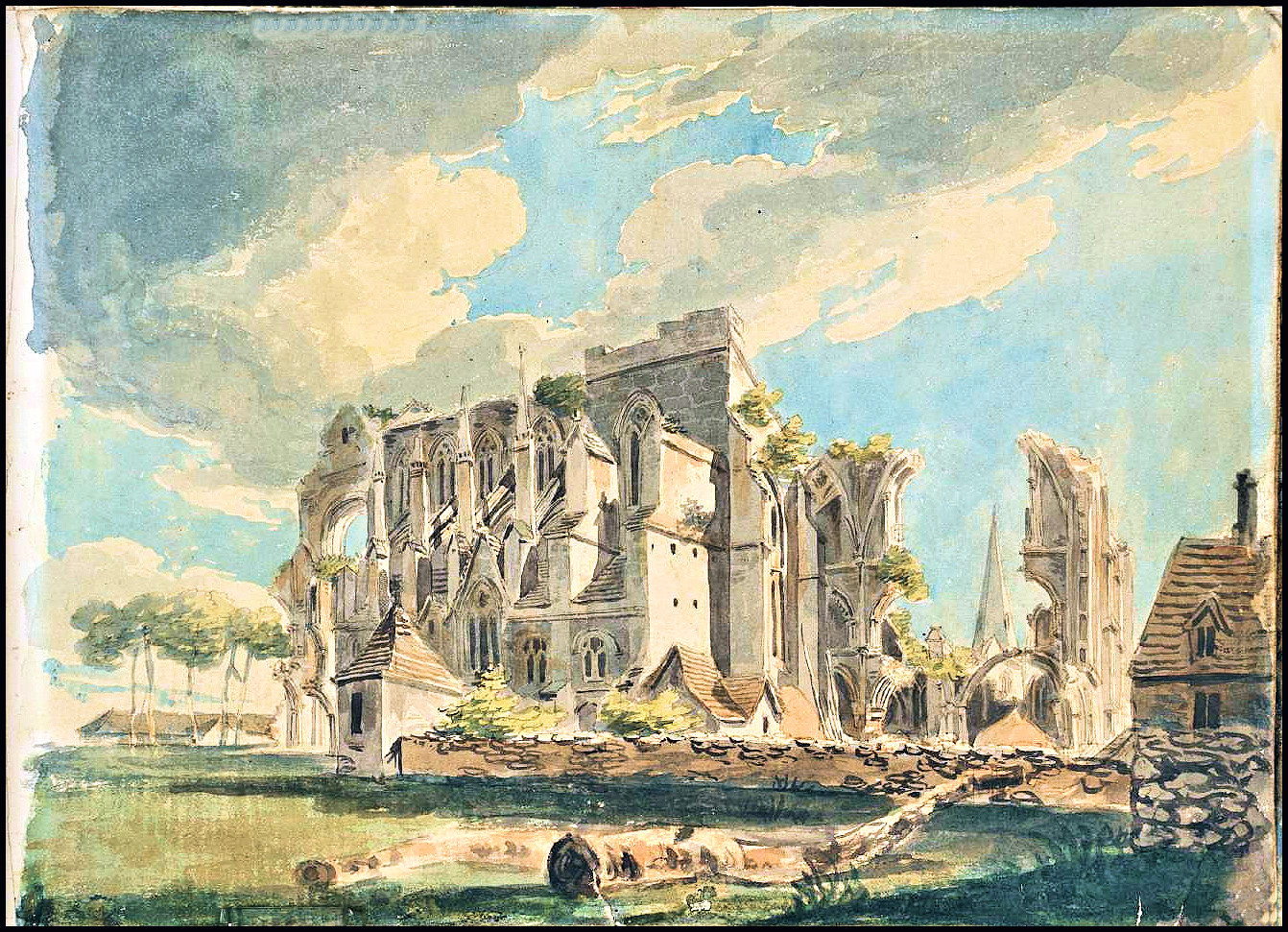 One of the foremost attractions of modern day Malmesbury for me is the Abbey Gardens.   Adjacent to the Abbey itself, and built on a steep hillside directly above the River Avon, the gardens are a delight, with numerous sections each offering different plants, colours and perspectives.

On my first visit there several years ago, I took this photograph of a decidedly risqué gardener hedge pruning . . .

I later discovered that the gardens have a secondary status as the horticultural project of the ‘Naked Gardeners’. The concept certainly added interest to an already extraordinary garden.

I have very recently found, however, that the future of the gardens is under threat as the intrepid pioneers of naked gardening, who have created and sustained the garden for many years, have now placed the whole property up for sale.  So, how long the abbey gardens will remain open, and whether or not, and in what form, the project will continue is very much in doubt.

The current position regarding the future of these beautiful gardens was summarised in a recent article in the’ Telegraph’,under the heading: ‘Paradise Lost for Divorcing Naked Gardeners’ . . .