I have a book, passed down to my wife from her father and his father before him, with the title of ‘ILLUSTRATED ANECDOTES and PITHY PIECES’.  It was published in 1874 and which, of course, contains just what the title describes – well, the Victorian idea of such things!

I am reproducing a scanned image of one of the entries which plays with words in rhyming couplets, as I often like to do in my own verses.  (Not sure about the attempt to rhyme ‘faith’ with ‘death’ though!). Amusing and educational aphorisms, life-enhancing even, and very PITHY !!!

Bring me the head of a daffodil in bloom
Or a buttercup’s yellow gold.
For Spring begins once more
And I am old.
My tears are wept,
I need redress for promises kept.

Show me the butterfly
As it darts and flutters by,
While beneath its breath it sings,
And with burgeoning wings,
Greets the new day’s warmth.

Celebrate the zigzagging bees
Attending each welcoming flower;
Keeping time with the breeze
And gathering nectar
To store in their bower.

For vibrant Spring is on its way,
Rebuilding now its vernal bouquet
Of warmth and renewal,
Pursuing its promise with every day.

Yes, my youth brought many vital moments
among my native hills.
Such interludes return now
in flashback and in dreams
in vignettes and in echoes;
instances of acute sensitivity,
memories more precious and persistent
as year passes into year.

I wish I had been more alive then,
more interwoven with my surroundings,
instinctively attached to the skies above
and to the rolling landscape below.

For there, on the vast wide-open moorland
where, above my breathing,
what I heard, was only the sound of the bees
visiting the sun-yellow gorse,
and the sighing rustle of the breeze
playing amongst the curls of bracken,
the blackbirds circling above in the sundown dusk,
calls of the curlew, lapwing and meadow pipit
lost in broom , hidden in heather.

Sometimes, in the bliss of solitude’s memory,
I have known a disregard for time itself,
and I sense I would happily reach eternal slumber
in the rapturous throes of such longing.

From time to time I intend to reproduce, usually with minor changes, a few of my earliest WordPress posts from ‘Roland’s Ragbag’.  These will be ones which were, and are still, of particular import to me and which most of my current followers and readers will not have seen or read before.  For those of you who may have come across the earlier versions, I do hope you will consider them to be worthy of a second airing. 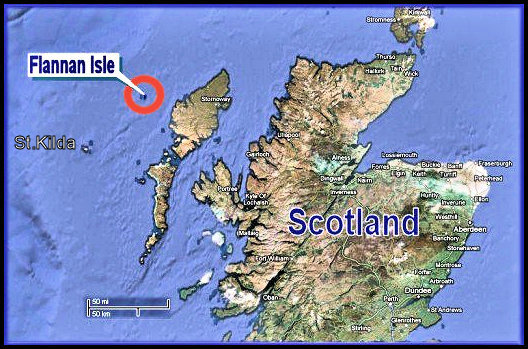 In 2012, on a Round Britain cruise, I passed close to the Flannan Isles and to St.Kilda.  This was, for me, meant to be the highlight of the cruise, as I had in the past read much about both these remote places – the outermost islands of the Outer Hebrides – St.Kilda in fact being the furthest west point of the whole British Isles.  Unfortunately, the weather, as is often the case in those parts, was not good.  The sea was rough and the islands shrouded in mist.  I did manage a few photographs of St.Kilda, covered in mist and seabirds, but that was it. . .

Flannan Isle is in fact a small archipelago of seven rocks, sometimes known as ‘The Seven Hunters’.  It has held great interest for me ever since, way back in my school days, just about my first introduction to narrative poetry was through the re-telling, by Wilfred Wilson Gibson, of the story of the three missing lighthouse men in his poem  ‘Flannan Isle’ (q.v.).  The story, for those not familiar with it, has echoes of the story of the missing crew of the ‘Mary Celeste’.

The Flannan Isle lighthouse was constructed in 1899 by David and Charles Stevenson.  Just a year later, when investigating why the light was not lit, 3 men landed on the isle but could find no trace of the 3 lighthouse keepers.  Although the table in the lighthouse was set with food, and although the rules of procedure insisted that one man should always remain in the lighthouse, no trace of any of them was ever found.   The full story is recounted in Gibson’s poem.  I have always remembered in particular the emotive last verse:

‘We seem’d to stand for an endless while,  Though still no word was said,
Three men alive on Flannan Isle,  Who thought on three men dead.’

The whole story was brought vividly back to me when I recently read Peter May‘s 2016 book, ‘Coffin Road’.   Gripping from the very beginning, It is a top-quality read – the best book I have read for a long long time.

‘A man is washed up on a deserted beach on the Hebridean Isle of Harris, barely alive. He has no idea who he is or how he got there. The only clue to his identity is a map tracing a track called the Coffin Road.’

Flannan Isle itself, and the story of the three lighthouse men, are central to the story. There is a very strong plot and, as well as being a first-class thriller, the story has a cogent environmental message concerning the dangers of science being exploited for profit unrestrained by ethics.  As in others of his books, Peter May brings the Hebridean landscape to vivid life in all its rugged beauty, as well as realistically conveying the wildness of both the Hebridean sea and its weather.

I also learnt a lot about Bees from ‘The Coffin Road’ !!!   I thoroughly recommend it.

One evening in July

greens, so many greens
each tree, shrub, plant
varied in their shades
proving their uniqueness
setting themselves apart
by shape and colour
claiming their own personality

other minutiae fuss and flurry
in their chosen domains
butterflies, beetles,
hoverflies
nature’s drones
engaged with their own agendas

the collared dove cooing on the rooftop
the chirrup, twitter, chatter of
evening’s bedtime birds

I have a book, passed down to my wife from her father and his father before him, with the title of ‘ILLUSTRATED ANECDOTES and PITHY PIECES’.  It was published in 1874 and which, of course, contains just what the title describes – well, the Victorian idea of such things!

I am reproducing a scanned image of one of the entries which plays with words in rhyming couplets, as I often like to do in my own verses.  (Not sure about the attempt to rhyme ‘faith’ with ‘death’ though!). Amusing and educational aphorisms, life-enhancing even, and very PITHY !!! 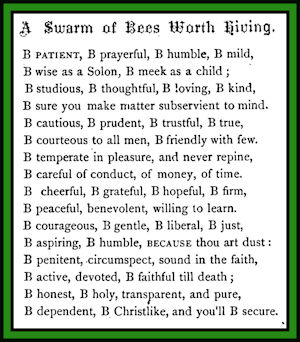