(No.63 of my favourite short poems)

Ted Hughes, born in Yorkshire in 1930, was Poet Laureate in the last years of the 20th Century, from 1984 until he died in 1998 at the age of 68.   His tempestuous marriage to the American poet, Sylvia Plath, lasted only six years.   Hughes explored this difficult relationship in his last major published work, ‘Birthday Letters’.

As much of his work demonstrates, Hughes was intensely interested in and affected by the natural world.  In ‘Hawk Roosting’, one of his early published poems, he conveys the commanding presence of the hawk looking down on the world, his world, from a place of eminence.  He considers himself as monarch of all he surveys, conveyed so powerfully by Hughes in this poem. 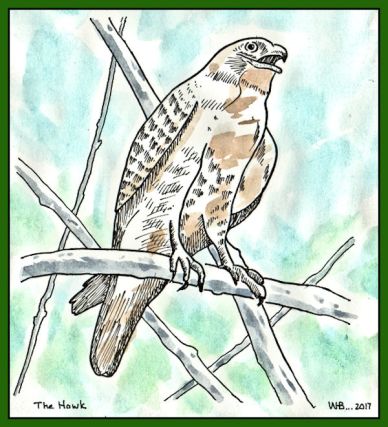 I sit in the top of the wood, my eyes closed.
Inaction, no falsifying dream
Between my hooked head and hooked feet:
Or in sleep rehearse perfect kills and eat.

The convenience of the high trees!
The air’s buoyancy and the sun’s ray
Are of advantage to me;
And the earth’s face upward for my inspection.
My feet are locked upon the rough bark.
It took the whole of Creation
To produce my foot, my each feather:
Now I hold Creation in my foot
Or fly up, and revolve it all slowly –
I kill where I please because it is all mine.
There is no sophistry in my body:
My manners are tearing off heads –
The allotment of death.
For the one path of my flight is direct
Through the bones of the living.
No arguments assert my right:

The sun is behind me.
Nothing has changed since I began.
My eye has permitted no change.
I am going to keep things like this.