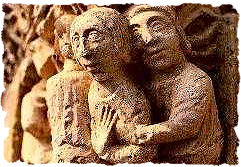 Do you remember the first time we met?
A long time ago but hard to forget.

Still so alive in my memory,
The feed to my every reverie.

Do you remember that first ever kiss,
When soft lips touched in newfound bliss?

Raw hearts first bled in ecstasy,
The thrill of our conjoined energy.

Do  you remember that first night of obsession
Love fully felt, all fervour, all passion

The need for each other at last fulfilled
The essence of joy in conjunction distilled.

All those memories now, facing reality,
Time and circumstance have brought finality.

The last test awaits, giving pause for decision,
Oh, let it be you who completes the Vision.

The fountains mingle with the river

And the rivers with the ocean,

The winds of heaven mix for ever

With a sweet emotion;

Nothing in the world is single;

All things by a law divine

In one spirit meet and mingle.

Why not I with thine?—

And the waves clasp one another;

No sister-flower would be forgiven

If it disdained its brother;

And the sunlight clasps the earth

And the moonbeams kiss the sea:

What is all this sweet work worth

If thou kiss not me?

‘It is not always easy to speak of love.  The words we use to do so are often tortured and can be made incomprehensible by passion and heedlessness.  So, how then do we speak of love?  How does the poet speak of love?  Is the language of love pre-ordained?  Should it run to a formula?  The formula, perhaps, of formal English speech – syntax in other words?  The expression of love surely by-passes such strict rules, and resides in the lips, the eyes, the heart.

In short, simple precisely to-the-point words, Carol Anne Duffy, Britain’s current Poet Laureate, in this poem, unlike any other love poem I have ever read, conveys the thoughts, desires, hesitations which beset us in the search for a meaningful form of capturing such feelings.’

Because I so do  –
as we say now  –   I want to say
thee, I adore, I adore thee,
and to know in my lips
the syntax of love resides,
and to gaze In thine eyes.

Here is a spoken version of the poem “Syntax” by Carol Ann Duffy (read by Tom O’Bedlam) . . .

A headline from a recent edition of the ‘Daily Mail’ read:

‘Mother demands her son’s school take ‘Sleeping Beauty’ off the curriculum because the princess doesn’t give consent to be kissed and woken up by a prince.’

One of our favourite fairy tales
Has fallen under a cloud;
For kissing a soundly sleeping beauty
They say should not be allowed.

Apparently a passing prince
Came upon a lass,
Innocently fast asleep,
And then he made a pass.

Engulfed by a kindly urge
This gallant lad lent down.
He gently kissed her soft pink lips
To take away her frown.

Startled then she leapt right up
And slapped his beaming face.
The Prince soon knew he’d done her wrong
And now was in disgrace.

“How dare you touch me without consent?”
She yelled at him in ire,
“My dignity, my personal space,
Penance they require.

And thus the fairy tale did end,
So let this be a lesson.
Even a naive act of love
Can now be thought aggression.

PLEASE NOTE:   Although it is not usually my habit to post over the weekend, do look out for a new blog from my pen each day of the coming Christmas period.

(No.60 of my favourite short poems)

This Sonnet is by Edna St. Vincent Millay, an American poet and playwright who was born in Rockland, Maine, in 1892.  I find it a moving and poignant poem looking back on her more youthful days with regret and intense longing.  Her sonnet is written in the Italian form, divided into two parts – an eight-lined octet, followed by a six-line sestet, here presented as just two sentences.  It is both reflective and filled with remorse.

Millay’s first published poem, ‘Renascence‘ was particularly well received and launched her on her writing career.  For a large part of her life Millay lived and worked among her Bohemian friends in New York’s Greenwich Village milieu.  Known to her friends as Vincent, she was openly bisexual, and gradually accrued both fame and some notoriety.   In 1923, she was awarded the Pulitzer Prize for ‘The Ballad of the Harp-Weaver’.   Edna St Vincent Millay died in 1950.

“What lips my lips have kissed, and where, and why”

What lips my lips have kissed, and where, and why,

I have forgotten, and what arms have lain

Under my head till morning; but the rain

Is full of ghosts tonight, that tap and sigh

Upon the glass and listen for reply,

And in my heart there stirs a quiet pain

For unremembered lads that not again

Will turn to me at midnight with a cry.

Thus in the winter stands the lonely tree,

Nor knows what birds have vanished one by one,

Yet knows its boughs more silent than before:

I cannot say what loves have come and gone,

I only know that summer sang in me

A little while, that in me sings no more.

(Poem No.49 of my favourite short poems) 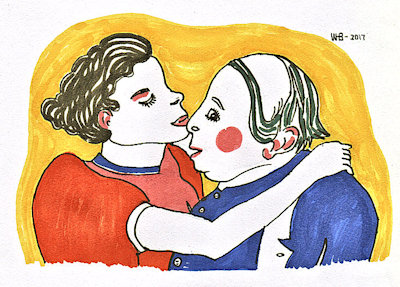 The Sunset Years of Samuel Shy

Master I may be,
But not of my fate.
Now come the kisses, too many too late.
Tell me, O Parcae,
For fain would I know,
Where were these kisses three decades ago?
Girls there were plenty,
Mint julep girls, beer girls,
Gay younger married and headstrong career girls,
The girls of my friends
And the wives of my friends,
Some smugly settled and some at loose ends,
Sad girls, serene girls,
Girls breathless and turbulent,
Debs cosmopolitan, matrons suburbulent,
All of them amiable
All of them cordial,
Innocent rousers of instincts primordial,
But even though health and wealth
Hadn’t yet missed me,
None of them,
Not even Jenny, once kissed me.

These very same girls
Who with me have grown older
Now freely relax with a head on my shoulder,
And now come the kisses,
A flood in full spate,
The meaningless kisses, too many too late.
They kiss me hello,
Should I offer a light, there’s a kiss for reply.
They kiss me at weddings,
They kiss me at wakes,
The drop of a hat is less than it takes.
They kiss me at cocktails,
They kiss me at bridge,
It’s all automatic, like slapping a midge.
The sound of their kisses
Is loud in my ears
Like the locusts that swarm every seventeen years.

I’m arthritic, dyspeptic,
Potentially ulcery,
And weary of kisses by custom compulsory.
Should my dear ones commit me as senile demential,
It’s from kisses perfunctory, inconsequential.
Answer, O Parcae,
For fain would I know,
Where were these kisses three decades ago?

Frederic Ogden Nash (1902 – 1971) was an American poet well known for his light verse, of which he wrote over 500 pieces. With his unconventional rhyming schemes, he produced some of the best-known humorous verse. From time to time his poetry can be extremely moving and delicate with a beautiful turn of phrase – as in this particular poem where he writes of  “the meaningless kisses, too many, too late”.

The Parcae: In ancient Roman religion and myth, these were the female personifications of destiny, often called the FATES in English.

‘Jenny kiss’d Me’  is a poem by the English essayist Leigh Hunt. It was first published in November 1838 by the Monthly Chronicle.   The poem was inspired by Jane Welsh, the wife of Thomas Carlyle. According to anthologist Martin Gardner, “Jenny kiss’d Me” was written during a flu epidemic, and refers to an unexpected visit by the recovered Hunt to the Carlyle household and being greeted by Jenny.

The RONDELET   is a poetic form originating in France.  It consists of a single septet (7 lines) with just two rhymes and one repeating refrain, in the fom of: AbAabbA.  (The capital letters represent the repeats. The 3 refrains (A) are written in tetra-syllabic (dimeter) and the other lines are twice as long, these being octasyllabic (tetrameter).

Below I print three of my attempts at constructing a RONDELET – all on the subject of ‘PARTING’ . . .

Scanned image by Philip V.Allingham of a wood engraving by Dalziel at: http://www.thevictorianweb.org

(A similar form, but not strictly a Rondelet, the lines of the refrain being in trimeter ! )

The description, with examples, of this poetic form can be found on the :
‘Shadow Poetry’  website

I remember that evening –
The sun sinking low,
When you stood beside me
Sharing the glow.

We bathed in that splendour –
That golden sunset,
Drenched in that promise
I’ll never forget.

I held your hand tightly,
Placed a kiss on your lips
In youth, in the gloaming,
The lie was eclipsed.

For then we were young,
Life had not bitten hard.
Our futures seemed certain
But we let down our guard.

I left with a pledge,
But never returned;
Dissolved into dreams
Your derision I earned.

But now we are older,
Life has taken its toll.
Is it too much to ask,
Can I recapture your soul?

Now that same sun is sinking
Setting fire to the sea;
Can this Phoenix bring hope
To you and to me?

Let me hold your hand now,
Place a kiss on your lips,
For bliss in old age
Does all else eclipse.

lit by the glistening dying sun

hovering above the reticent waves

but with one intention

there they still were

heels up as though

to meet lips above her head

as though pulling her into

a moment of fruition

a snippet of time

held in that sand mould

soon to be gone

of that fleeting act

The composition of this imaginative verse narrative was based on the first two photographs and the central painting (of the two sets of facing footprints).  These are the creations of the Canadian artist, Alma Kerr, to whom I am indebted for granting me permission to use them.

Over one pendant heart our sighs enmesh,
Gripped by a similar aspirant fuse,
To engage and perpetrate our love,
Resolve our natures, past abuse.

Set apart from stolen trysts;
Enjoyed in our own pristine ways;
Captioned by us alone with worth;
Our love supplies itself with praise.

Enthused with thoughts of sacrifice
Made pleasure, when another’s wish
Suggests that all is not suffice,
My hope ferments, divinely sung.

More fully seasoned with each kiss
A good ripe wine tells on the tongue.